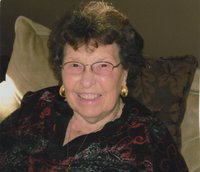 Beth (Mary Elizabeth) Smith Rader (AKA Grandma Beth), age 90, of Lamar Missouri passed away peacefully Thursday, January 9, 2020 surrounded by her loving family. Beth was born August 11, 1929 to Ralph and Verla Smith of Liberal, MO where she grew up and graduated from Liberal High School in 1947. Beth also attended Pittsburg State University in Pittsburg, Kansas. For 16 years Beth worked tirelessly to achieve a Bachelor of Science degree in Education while managing her household, her farm, and her elementary classrooms. Beth was a sparkling diamond who touched many lives. She was a devoted mother, grandmother, and great-grandmother and was cherished by her family in return. Beth was a life-long member of Hopewell Cumberland Presbyterian Church and an associate member of Lamar United Methodist Church. In 1987-1988 she was honored to be elected as President of the Cumberland Presbyterian Women's Convention. Beth taught in one room country schools from 1949-1961 in Barton County. Beth taught seventh grade in Sheldon from 1962-1964 and then fifth grade in Lamar from 1964-1982. Beth was president of Lamar Teacher's Association and was the first woman elected to the Lamar R-I School Board. Beth was named Missouri Retired Teacher of the Year in 2005. She was a life-long volunteer and mentor. Beth loved traveling and experiencing other cultures around the world. Her most memorable trips included extended stays in Israel, Papua New Guinea, and Japan. Beth was the beloved matriarch of her family and will be missed by them every day. She is survived by her brother Howard Smith (Joanna) of Joplin, MO, her three daughters and sons-in-law, Barba Parrish (Ron), of Lamar, MO, Ann Ditty (Mike), of Lee's Summit, MO, and Cyndy Johnson (Rick) of Lamar, MO, seven grandchildren: Emily Ditty (Michael Castle) of Seattle, WA, Nathan Ditty (Emily) of Blue Springs, MO, Brian Parrish (Katie) of Mt. Vernon, MO, Chad Johnson (Rebekah) of Kansas City, MO, Natalie Fogle (Spike) of Springfield, MO, Nicholas Ditty (Lauren) of Kansas City, MO, and Kim Parrish of Springfield, MO, fifteen great-grandchildren and many nieces and nephews. Beth loved them all so well they each believe they were secretly her favorite. Beth was preceded in death by her parents, Ralph and Verla Smith, and six brothers and sisters, Irma Mae Ledford, Marie Howard, Reed Smith, Marlyn Sauerwein, Sue Williams, and Baby Jim Smith. Services will be held 2:30 P.M. Sunday January 12, 2020 at the Lamar United Methodist Church. There will be a Visitation Starting at 1:00 P.M. Memorial donations may be made to the Cumberland Presbyterian Children's Home or to a scholarship fund for future teachers that will be establish in her memory. Donations may be made in care of the funeral home.