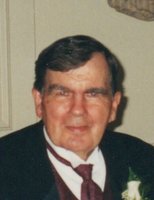 Jess Gilbert Searles, 92, passed away on Monday April 6, 2020 at the Cox Barton County Memorial Hospital surrounded by his family. Jess was born in Liberal, MO on June 13, 1927 to Harvey and Bessie (Adams) Searles. He was one of nine children. Jess graduated from Liberal High School in 1946. Right out of High School he joined the Navy and served in the South Pacific, at the end of WWII. Jess married Clara Belle Geisler and they spent 65 wonderful years together in Iantha, MO. Jess had many different jobs including working for MFA and driving a road grader for the county. He worked for MO Pub Service setting power lines, hauled hay and followed the wheat and potato harvest through many states. He was a long-time employee at O’Sullivan’s where he and Clara Belle retired on the same day in 1999. Jess enjoyed putting out a big garden every year and will be most remembered for his generous and giving nature; always ready to help friends, neighbors, and family in any way that he could. Jess is survived by his wife; son Jess O. (Janet) Searles of Iantha, MO; daughters Susan Bronson of Lamar, MO; Carrie (Steve) Cenzer of Las Vegas, NV; Mary Jo (Chuck) Mincks of Lamar, MO and Audrey (Mike) Hunt of Lamar, MO; 15 grandchildren and; 9 great grandchildren plus one on the way; one sister Mary Ann Therkildsen of Bentonville, AR; and a host of other family members and dear friends. He was preceded in death by his brothers; Isaac Searles, Owen Searles, Jim Searles, Harvey Searles, and his twin John Searles, two sisters; Zora Fast and Margaret Davis his son-in-law Bob Bronson and great granddaughter Ava Bronson. A graveside service will be held on Friday April 10, 2020 at 2:00 pm at the Iantha Cemetery, Iantha, MO.