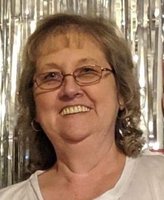 Wilma Jo Puckett passed away on Tuesday November 3, 2020. She was born March 20, 1960 in Carthage, MO to Donald and Hazel (Lowe) Rogers. She married Kenneth Puckett on May 30, 1980. Wilma worked for O'Sullivan Industries for 13 years and then for Walmart for more than 13 years. Her great accomplishment was raising her boys. She was known for her love of her family and was always helping someone out. She was an avid Chief's fan who did not give up on her team, even when everyone else had. Wilma enjoyed flea markets and thrift stores. She truly enjoyed a bargain and found a reason to bring home a good deal even when it really wasn't needed. She also enjoyed sewing, carnations and eating chicken at Gebhardt's on Fridays. Wilma always had a joke for her coworkers and was known to have a heart of gold. Wilma is survived by her sons Brian Puckett and Brent (Melinda) Puckett of Lamar, MO, and by four sisters; Mary Kay White of Lamar, MO, Tracy (Chuck) Kennedy of Joplin, MO, Pamela (Ron) Slater of Lamar, MO and Connie (Jerry) Smith of Rich Hill, MO. She is preceded in death by her husband, parents and brother, Donnie Rogers Jr. The family will accept visitors from 5 pm to 7 pm on Thursday November 5, 2020 at Konantz Warden Funeral Home. A funeral service will be held at 10 am on Friday November 6, 2020 at Konantz Warden Funeral Home followed by interment at Memory Gardens Cemetery. Donations in lieu of flowers can be made to the Children’s Miracle Network.