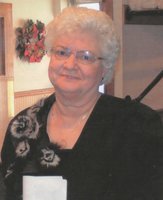 Born on September 22, 1941 to her natural parents Charles Clark Hamman III and Analine Helen Hamman on the Marine Corps base in Quantico VA, Anna Lee Feltenberger, 79, of Lamar, MO slipped into peaceful slumber on Saturday April 17, 2021. Mrs. Feltenberger was surrounded by friends and family at her passing. She was married to Thomas B Feltenberger on June 20, 1983 and was preceded by him in death on October 10, 2010 and by her brother Charles Clark Hamman IV. She is survived by her brother David Michael Hamman of Dallas, TX, her son Raynaldo Measimer and his fiancé Ronyea Harvey of St Louis, MO and his children Kylie, Lexi, Brayden and Delaney; her daughter Lois Analine McBride and her husband Charles McBride of Dixon, IL and their children Joshua Rubright, his wife Minel Rubright and their daughter Asha; Crystal Norden, her husband Chris Norden and their children Jaxson, Levi, Destan and Sadie AnaLee; Nichole Ortiz, her husband Julio Ortiz and their daughter Janessa; and her daughter Cynthia Measimer and her fiancé Kira March of Springfield, MO and their children Abby and Oliver. Anna spent her career as a registered nurse and was certified in oncology and geriatrics. She finished her career at Chastain’s of Lamar, MO where she started and taught the CNA program. After retirement she spent her time as a volunteer at the Good Samaritan and other Christian causes. Anna held local elected offices, was the founding president of the Friends of the Library, founding member of the Ambulance Board, active and nationally recognized for her period hat making skills in the SCA, was a member of the Eastern Star and Rebekah Lodges and was a proud Red Hat lady. Donations in lieu of flowers can be made to The American Cancer Society. The family will receive visitors at Konantz Warden Funeral Home on Wednesday April 21, 2021 from 10 AM to 11 AM. A funeral service will follow at 11 AM.