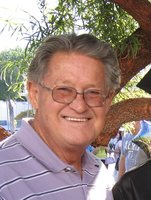 Victory Lee Clayton passed away on Saturday May 9, 2021. Victory was born May 7, 1945 in Stillwater, OK to Silas and Maudie (Huff) Clayton. He graduated from Vallejo High School in California. On July 24, 1965, he married Connie Mott in Modesto, CA. They lived in several places in California, especially Northern California. Victory completed four years of Carpentry School in Walnut Creek, CA. He worked as a carpenter and then became a Pastor. He was a Pastor in Gridley, CA and Fairfield, CA for 8 years. Three years ago, Victory and Connie moved from Cathedral City, CA to Lamar, MO where Victory served as Associate Pastor at Living Word Church. He is survived by his wife; children, Kimberly Carnahan of Lamar, MO, Curtis (Cherice) Clayton of Lamar, MO, and Kevin (Brandy) Clayton of Oregon; grandchildren, Shane (Betty) Carnahan, Victoria (Ethan) Bergland, Matt Clayton, Jennifer (Abbey) Logan, Jessica Johnson, Joshua Clayton, Shawna Clayton, and Cheyenne Clayton; great-grandchildren, Ivan Bergland, Harlynn Bergland, Quinn Johnson, Skyler Deshazo, Joey Butler, and Mikaylee Butler. He is also survived by his sister Dollie Crandall of Vacaville, CA and brother, Jim Clayton of Oregon. Victory is preceded by his parents; siblings, Donnie Clayton, Jerry Clayton, and Marjorie Groves; and son-in-law Randy Carnahan. Donations in lieu of flowers can be made to Living Word Church. A memorial service will be held at Living Word Church in Lamar, MO on Saturday May 15, 2021 at 3:00 PM. Eulogy: Victor was a hard worker, who was skilled with carpentry, and was a fix it kind of guy. Victor completed 4 years of carpentry school and was a pretty amazing Carpenter. He loved to work ith his hands. He put this skill to use when he worked at Tamarisk Golf course, a renowned golf course that brought the rich and famous. Victor would commonly speak of the famous people who golfed there, such as the owner of Baskin Robins, Desi Arnaz, Bob Hope, Telly Savalace, Frank Sinatra, Lucille Ball and Red Skelton. Tamarisk County Club was famous for hosting the Bob Hope Classic. He worked for Tamarisk for 35 years. He only had a few passions in his life, first was his love for Jesus Christ, second was his love for his one and only wife Connie, who he robbed from the cradle at age 16, and third was his children. Family was everything to him. They were very close, and the time they had together meant everything to him. He also had a calling on his life to preach, which he started at the age of 16. He served the Lord many years. He became a Pastor in Gridley CA and served there for 8 years, then moved to Fairfield CA, and Pastored 3 more years. After he finished these assignments, he always said, God promised to use me again. In 2017, he moved to Lamar MO, to relax, do some frogging, and be near his kids. But the Lord found him there, and he was asked to step up and be the associate minister for Pastor Mark Cummins at Living Word Church, where he became revered by the people. He was licensed and ordained until his death, and was in good standing with MBM. He had aclose relationship with Pastor, and they became great friends. And they enjoyed going out every week for breakfast. Victor was known for his humorous personality. He always had a funny story, and a quick wit about him. He generally presented an exhortation every service, and made people smile with his great stories. Victor also loved to cook, he even volunteered to make the popcorn on church movie nights. Victory Clayton was a Family man. One of his Favorite things to do was have Family Campouts. He has always had a love for the country, and he definitely loved playing games, whether it be cards, dominoes, or any other family game, though you had to watch him, because he was a sneaky one, when it came to cheating. Victory was an amazing man, and touched the lives of so many people. He will truly be missed, and always loved, and most definitely never Forgotten. Heaven gained another amazing Angel.