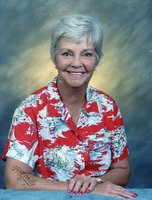 Ardith Faye Watson passed away on June 18, 2021. She was born in Sheldon, MO to Robert and Lois (Gossett) Waits. She grew up in Milford, MO and graduated from Lamar High School in 1961. Ardy loved animals and always had a menagerie. She enjoyed living in the country because she had room for more animals. She never missed one of her boys’ activities, especially baseball. She cherished the time she spent with her grandchildren, especially during holidays where she always took the opportunity to spoil them more than usual. She liked to garden and was known for her green thumb. Ardy was a good cook. She worked in a variety of food related jobs including as a donut maker at Daylight Donuts, a cook at the Country Club, and she worked at Summer Fresh where she enjoyed the food prep and cooking in the deli area. Ardy is survived by her sons, Rob (Deana) Berryhill of Raymore, MO and Josh (Jennifer) Phipps of Lamar, MO; grandchildren, Parker Berryhill, Rachel Berryhill, and Korra Phipps; great-grandchildren, Stella Taylor and Bubba Taylor; and her sisters Jeanie (Wayne) Leavell of Lamar, MO and Saundra (Terry) Moore of Lamar, MO. She is preceded in death by her son John Berryhill. Donations in lieu of flowers are suggested to the Humane Society. A memorial service will be held at 7:00 p.m. on June 30, 2021 at Konantz Warden Funeral Home.