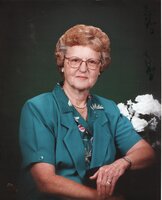 Patricia Sue (Sechrist) McKay was born at Mt Carmel Hospital in Pittsburg, KS, January 14, 1933, to Gerald and Grace (Hodge) Sechrist of Liberal, MO. She grew up in Liberal and graduated from Liberal High School in 1950. She married Karl Fast, September 17, 1950 at her parents home in Liberal. They moved to a 40-acre farm in Liberal, MO when Karl returned from service in Korea in January of 1953. They lived on this farm until the sudden passing of Karl from a massive heart attack on March 1, 1995. Patty stayed on the farm until selling it. February 14, 1999 Patty married Bob McKay. They lived between her home in Lamar and his farm 4 miles west of Liberal. Then they built a home on the farm and moved there in March 2004. Patty was preceded in death by her parents, husbands; brother Gordon Sechrist; sister Geraldine Mitchell; and nephews Mike Mitchell and Pat Mitchell. She is survived by Mary Lou Sechrist of Joplin, MO; niece Carol Clark of Bella Vista, AR; and several nieces and nephews. She is also survived by several stepchildren, Janet (Russell) Vahle Warrenton, MO, Bobby (Linda) McKay of Liberal, MO, Jeanne (Lynn) Hoover of Liberal, MO and Jay (Tricia) McKay Liberal, MO; 10 grandchildren; and 24 great-grandchildren. Donations in lieu of flowers can be made to the Barton City Cemetery or a charity of choice in care of Konantz Warden Funeral Home. A visitation will be held from 10:30 AM to noon at Konantz Warden Funeral Home and graveside service will be at 12:30 PM February 26, 2022 at Barton City Cemetery in Liberal, MO.