Sign in
Recommend Maxine's obituary to your friends
Plant A Tree 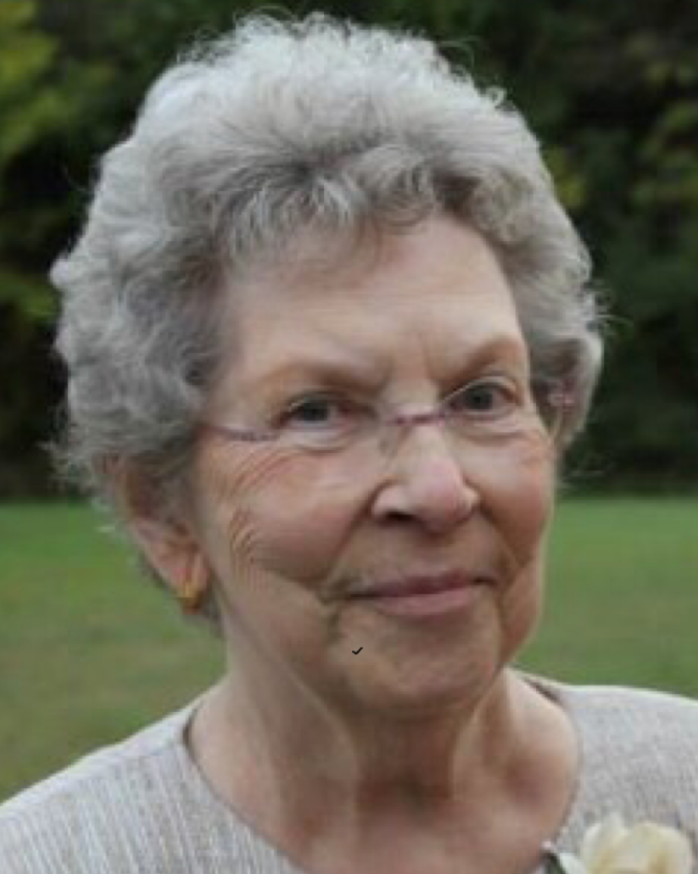 On March 26, 2019 God’s special child, Mary Maxine (Baker) Schell went home to be with her Heavenly Father. Maxine lived a full and abundant life surrounded by family and friends. She worked tirelessly to stay connected to immediate and distant relatives. She will be greatly missed on earth, but all who knew her can rejoice that she is singing with the angels.

Maxine was preceded in the journey home by her husband Roger Glenn Schell, by her brother Stan Baker of Blue Springs, Missouri and by her parents Mary Vernette (Travis) Baker and Gail L Baker of Kenoma, Missouri. She served in her earthly rolls of daughter, sister, cousin, mother, grandmother, great grandmother, and friend with faith and love.

She is survived by her three children: Sharline Paul and her husband Carl Blank of Columbia Missouri, Martin Schell of Russellville, Arkansas, and Jenine Thompson of Plano, Texas. She was blessed with nine grandchildren: Aimey Stude, Jennifer Cook, Andrea Wiggins, Nikki Robinson, Austyn Paul, Valerie Hommen-Roddy, Paul Henry Thompson, Hayden Thompson, and Audrey Thompson. In addition, she leaves her brothers Foster Baker of Iowa City, Iowa, George Baker of Lamar, Missouri, Danny Baker and his wife Deb Baker of Rapid City, South Dakota, Mike Baker of Oklahoma City, her sister Carol Medlin of Lamar, Missouri and sister in law Shirley Baker of Kansas City, Missouri. Add to that the ten great grandchildren and many nieces, nephews and cousins, she had a family she was very proud of.

Maxine was born in Lamar on December 19, 1931 and was raised in the small southwest Missouri community of Kenoma. She attended high school and met her future husband in Golden City, Missouri. As a young woman, she struck out on her own and moved to Kansas City. While most of her life was spent in Missouri she did live in California, Alabama, Oklahoma and Arkansas for short periods. She and Roger enjoyed travel and spending winters in Arizona in their retirement years. One of their great adventures was an RV trip through the heartland of Mexico and meeting the people of that wonderful country. She was an active member of the Episcopal Church for most of her adult life and made sure her children were raised to know her faith. While she worked at many jobs over the years, her family was always job one. She thrived on deep discussions and had a passion for history and knowledge, and a good debate was her bread and butter. Always an avid reader, Maxine enjoyed taking online courses and continuing to educate herself well into her 80s. In fact, her love of family lead to extensive genealogical research and associated travel for hands on research. She leaves her volumes of research for her children to continue. In addition, Maxine served as the quasi technical expert for all thing’s computer for her peer group. Throughout her life she influenced everyone she met. She will be missed by both people who agreed with her and those with differing opinions. She had a deep respect for her republic and the democracy for which it stood. Faith, family, friends, and country were deeply ingrained in her life.

There will be a grave side service at Memory Gardens Cemetery, Lamar, MO beginning at 11:00 am Saturday, March 30, 2019.

The following Eulogy was presented by Andrea Wiggins at the service for her grandmother:

Mary Maxine Schell, daughter of Gail L. Baker and Mary Vernet Travis, was born December 19, 1931 in Lamar, Missouri. She died at the age of 87 on March 26, 2019 in Columbia, Missouri. Maxine had six siblings: Foster, Stanley, George, Mike, Danny, and Carol. She married Roger Glenn Schell on August 9, 1954 at the Methodist Church in Lamar, Missouri. Maxine was an active member of the Episcopal Church for most of her adult life. Roger and Maxine had three children: Sharline, Marty and Jenine as well as nine grandchildren: Aimey, Jennifer, Andrea, Nikki, Austyn, Valerie, Paul Henry, Hayden, and Audrey. She also had ten great-grandchildren: Hannah, MaKenzie, Zachary, Cathrina, Kylie, Kadyn, Quinn, Sara, Steele, and Rayden. As a result of Roger and Maxine’s marriage, they produced 529 cumulative years of decedent life. She was so proud of her family.

For those who do not know me, my name is Andrea Wiggins, Maxine’s third grandchild, daughter of Sharline, seventh generation decedent of James Baker, and also labeled as Baker decedent #339 in grandma’s genealogy book. This was part of her life’s work—creating, documenting, and connecting family. With that, it only seems appropriate to share some of the memories written by grandma in her own words:

“In the spring of 1936, we moved back to Barton County, to a farm about two miles northeast of the small village of Kenoma, and about two miles in the opposite direction, from my maternal grandparent’s farm. Our farm was owned by Mr. Hollingshead, and Daddy raised cows and hogs “on the shares” with him. We had use of the house and barn and the pasture. Mr. Cotteral from the adjoining farm rented the rest of the row crops. There were about a dozen cows to milk, and we separated and sold cream. The milk portion was fed to the hogs.

We also had lots of chickens and sold eggs on Saturday night at the Farmer’s Exchange in Lamar. We had a kerosene heated egg incubator, where the chicks were hatched, on a table in the living room. Mother had a large garden and we ate well: all the pork, chicken, milk, eggs and vegetables we wanted.”

She also recalled, “Entertainment was free movies in Lamar on Saturday afternoon, and the band concert on the stage on the court house lawn on Saturday night. And, there were pie suppers at the schools, and ice cream socials, and in the winter, pinochle and pitch games with friends.”

This is just a portion of the many pages she assembled in this book and that she leaves behind for her family. I also want to share a few memories of grandma that you won’t find in the book.

When I asked Grandma how she and Grandpa met, she told me about the time her friend wanted Grandpa’s class ring. Her friend was shy, so Grandma went over and asked for it. To her surprise, he took it off and gave it to her. When she returned, her friend asked for it and Grandma reported that he gave it to her. And so began their story. She documented several of the years in a journal she kept and from what I recall, they continued to do a lot of card playing.

We all know Grandma was a little, oh should we say, strong willed. Marty shared a story with me that he remembers from his youth about a go-cart Grandpa built. He will have to fill in all the details for you all later, but it sounds like after Grandpa got it running and took it for

a spin, then Grandma insisted she should take it for a ride. Keep in mind, he just built it and didn’t have much time to check out the safety, but it sounds like after Grandma jumped on, the throttle got stuck and Grandma circled the yard with Grandpa chasing until she crashed it. Their kids stood by laughing. Although now one was hurt, there was no more work on the go-cart. This might provide us all a little more perspective on why they provided the grandchildren a golf cart for entertainment.

I remember the years of the golf cart. Grandpa taught us all how to drive and when proved ourselves competent, Grandma would make us a golf cart driver license. It was typed, included a picture and was fully laminated. Some of us were licensed golf cart drivers, however during family reunions you may recall incidents from those Grandma did not license. Grandma loved having her family around, I would go as far to say spending time with family was her favorite pass time.

In their later years, Grandma and Grandpa did a lot of traveling with and to see their grandchildren. Some of my favorite trips were to fly out to see them in Arizona, where they vacationed during the winter of their retirement years. Relaxing by the pool and eating donuts for breakfast at the club house, they had a wonderful retirement plan. I also recall when they returned from their big international adventure through Mexico with pesos, maracas, dresses and a new pen pal named Lupe.

Grandma was well read; she was always reading a couple of books at the same time. She managed to keep up with the times via Fox News and enjoyed taking her love of debate to

online forums, to include Facebook. She also enjoyed taking online courses continuing to educate herself well into her 80s. This might explain why Grandma was known to participate in Spring Break. When I was in college, I often would take Spring Break at her house in Oklahoma… we’d eat chocolate, Braum’s Ice Cream and have a movie marathon. My favorite Spring Break was when we went to New Orleans, me, her and my mother where we enjoyed beignets and a muffuletta. Although she is not with us in person today, let’s all rest assured she is enjoying her final Spring Break, eternally in heaven with Grandpa.